Dapo Signs On For Good 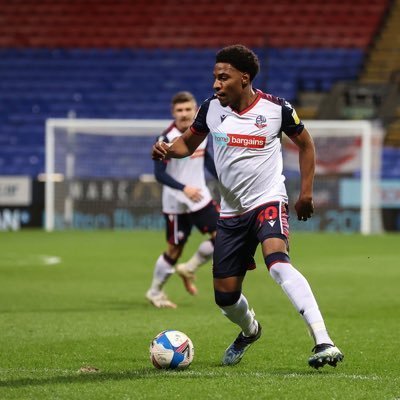 Bolton have made their first signing of the summer, after Dapo Afolayan made a permanent move to the UniBol on a three year deal.

The winger joined from West Ham on a loan deal in January and made 21 appearances to help us to promotion, capping it off by scoring what has been his only goal so far, in the promotion-clinching win over Crawley. Although he only scored once, that doesn’t really give you the full picture, or frankly any of it. Afolayan hit the ground running and never stopped, with opposing teams having to resort to underhand tactics to stop him, such was his trickiness. He was an automatic choice on the left, and along with Declan John, was one of the two loan players most fans will have wanted back for next season. Along with getting new deals sorted for Gethin Jones and Lloyd Isgrove this week, it has been a promising start to the summer as far as recruitment is concerned.

“I’m delighted to have made the move permanent. Since I joined on loan at the end of January, it has been amazing. For me, it’s the best thing for me to do – to keep playing regularly for a club that has embraced me. It was only right for me to repay that loyalty back to the club, back to the manager and the owners, and the fans as well,” Afolayan said.

“Dapo has shown that he is a very talented young footballer. It’s my job to get assets on the football pitch for Bolton Wanderers and Dapo is certainly an asset. Hopefully we can take Dapo where he wants to go and vice versa with Dapo taking the club to where it should be,” said Ian Evatt.